Yes I am going to be sleeping in a hammock under the stars with our Scout group, enjoying probably the last warm weekend of the year.  I will be trying not to think about politics but the fact is I feel like a huge hypocrite at the moment… and also one of the most truly blessed of all Canadians… and there are a lot of us.

Today you are going to hear me trying to type over tears, which I do not do very often.  The fact is, my homeland is being attacked and I feel the tug of my fellow Canadians.  I understand where you all are, and I also understand how the democratic process allowed Germans to vote in a new leader back in 1933 (I am not comparing our choices in this election to Hitler… but I am comparing the results).

Who wouldn’t rather read American election blogs from me?

I have dear friends who have been talking in social media from other provinces (and Alberta as well) about replacing our current idiot.  while I truly love some of these people and would easily take a bullet for them, I find myself wanting to hug them and smack them in the back of the head at the same time.

Less than six months ago, my province elected to replace 80 years of right-wing rule with the NDP… apparently because nobody was running for the Communist party.

In her first three months in power, Notley gave away over $300,000,000 in payments to people (mostly out of work Saskatchewan NDP politicians) for advice.  I was not even aware that the government could hand out money for advice… I suppose if nobody in the Alberta NDP knows how to ruin a province you go to another province they tried to destroy and pay them to help. 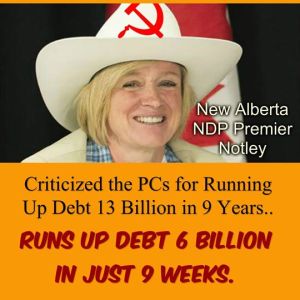 How could this actually happen???

I find myself now living in a province where the government hates all businesses alike, and apparently is bending over backwards to bury us in debt that my grandchildren won’t be able to recover from… oh, and they hate that we make money off oil.  Let’s get something straight Canada, Alberta pays more money to the federal government every year to help support the eight provinces who don’t have a natural resource that the rest of the world is willing to pay for.  We don’t mind, but don’t criticize us for selling it, cry for us now that we are run by a government who hates the stuff more than you do. 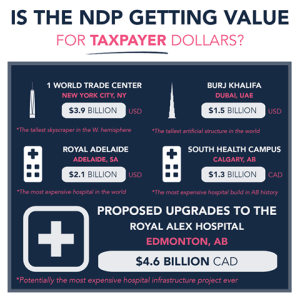 This Edmonton hospital will be the topic of another post so lets not get into this insanity today.

What truly ticks me off, is that they did this without a budget.  That is right, Alberta’s debt was approved to jump 50% in the past 6 months without a budget or plan to repay it.  No surprise, we will not see a budget until after the federal election because Tom Mulcair knows how bad it will make him look once it is published and the country sees how bad the NDP are with money (ask a province like Saskatchewan, BC or Manitoba what their experience with the NDP party is). 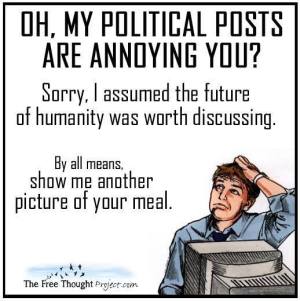 I only say “sorry” because I am Canadian

So what am I praying about for this election and why would I pray about it?

Because I do not want to believe that this country could make the same mistake as my province has… but then I didn’t believe we could elect these people in Alberta either.

But Harper is an idiot!!!  What about the Tom Mulcair NDP???

I agree.  I am tired of Harper.  He got elected on a platform of transparent government and then seemingly surrounded himself with criminals that he did his best to hide from the public…

His entire caucus seems to be hell-bent on going to prison or making the Conservative party look bad.  Our own representative in St. Albert – Edmonton actually walked away from the Conservatives, effectively committing political suicide, because he could not be a part of Harper’s government.

How dare they complain about Harper’s lies and legal issues.  I can’t believe that I consider myself a hypocrite.

did you know that the taxpayers paid this legal bill somehow???

Did Mulcair actually post this video? How the hell is he not in jail for letting tax payers bail him out after he was fined $95,000 for being a douchebag?

Kickstart the economy with the NDP? This is the same party whose provincial counterpart in Alberta just signed off on $6B in new borrowing without a budget right??? Tom Mulcair has consistently proved that he is not only horrible with money but should likely be in prison.

I am seeing more and more people tired of the negative attacks of this clown.  He can’t run a campaign on his merits or the merits of the NDP party because there are none.  So instead, he runs a campaign where his sign reads “stop harper”.   Can people actually vote for a guy who is afraid to advertise himself.

Tom has made no secret of his love of Unions and immigrants either.  He loves them much more than the people who built this country and who fought to keep it free.  He seems determined to crush our country one step at a time.  Look at this fun ad they shared off to get rid of Canada Post superboxes…

need those terrorist votes too!

We can’t have all this fun at the NDP expense, they are just the easiest to attack for me personally because my grandchildren will be cleaning up their mess in Alberta.  If you want to screw your children, vote them in for your next provincial election, please don’t show how little you love your country by giving them a blank cheque to run Canada for four years.

What about the Liberals???

Not under this kid.  I am not a fan of Liberal policies but would have no problem voting them in to smarten up the Conservatives and give them a chance to replace Harper and clean up their party.  As much as it pains me to admit it, I voted for Cretien.  Of course that was on the promise that he would abolish the GST and we saw how that worked out… at least Harper knocked it down to 5%.

Justin Trudeau has never worked a hard day in his life and simply has no idea how to run a country.  I hate those conservative ads that say he simply isn’t ready now… he never will be.  He is a career politician who loves the idea of running Canada way more than he loves Canada or Canadians.

And what about Mohamed Fahmy???

Anyone else want to slap Stephen Harper for helping to free this butthole? I love that Tom Mulcair and Justin Trudeau are both being promoted by this convicted terrorism supporter… this can’t do anything but help Harper get votes… I will say it again, as much as I dislike Harper as PM, he is so far ahead of the other options that I would clean his house if it helped him get elected.  The fact that the NDP and Liberals are using this convicted terrorism supporter to help get votes speaks more (or less) about them than I could ever write.  I will let Ezra explain if you haven’t figured it out yet.

Is there a woman out there not clapping for this prime minister?  He may not be perfect, hell he isn’t even close… but he is the only one not speaking up for Canadian rights!  I am not talking about one incident where some other idiot wants to wear a sheet to a citizenship hearing, I am talking about what it represents and why Canadians are sitting back and letting a foreign policy take over our beliefs.

That is another blog post (or two or three)…

For all my ranting and raving about Harper being the least of three evils, I am actually NOT voting for him.  I do not want my children and grandchildren to pay for what the NDP would do to our country if they got elected, I certainly don’t want that egomaniac Trudeau in power, his family had their run and it is over. 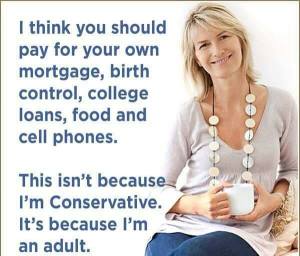 I will hope that Harper and his Conservative government get elected and clean up their party in the next four years.  Realistically, Harper’s problems are more about his refusal to follow his own advice and listen to the people about what we want, so he will have to be replaced by a better Liberal leader in the next election (2019?).  That will give the Conservatives some time to replace him and rebuild their party for a term or two while we are reminded why we hate Liberal governments. 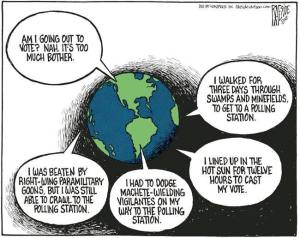 I will vote, and I hope more educated voters vote as well

I have the amazing opportunity to re-elect my local ex-Conservative, Brent Rathgeber.  He was a Conservative for the last federal election and right away saw that Harper was taking his party down a road he didn’t want to follow.  He walked away from a promising political career because the people who voted for him, that would be me, voted for a platform he was not representing.

If you live in Brent’s St. Albert – Edmonton riding I consider you a truly blessed Canadian this fall season.  You have the opportunity to vote for a person based on ideals rather than a party.  If you want to know more about who Brent is as a man, check out his platform.

For those of you that think that voting for an independent it throwing away a vote, consider this, Brent got a ton more stuff done as an independent in the past 2 years than he did in his first 5 years because he wasn’t hindered by middlemen politicians stopping him from speaking for his constituents when it didn’t follow the party line.

I get to vote for a man who will have the power to speak his voice.  He is a man of character and integrity and I implore people who see his name on a ballot on Monday to consider making a vote for Democracy and for Canadian values.

Does Brent agree with all my values and ideals?  Not even close.  but then he needs to be representative of a great many people and most of them would think I am nuts, some might want me arrested.  If you are not sure that he is the man to vote for, read for a few minutes about who he is as a person…

Read his blog if you have more time.

For the rest of you that do not see BRENT RATHGEBER on your ballet, please consider sucking it up for another four years of conservatism under Harper.  Maybe if enough of us lucky people vote for Brent on Monday your Conservative rep will have the guts to follow Brent’s lead and have the courage to walk away from Harper.

In four years, if the Liberals still have Justin in charge, maybe you will be as lucky as me and get to vote for a great independent representative.

Now back to a more enjoyable campaign… 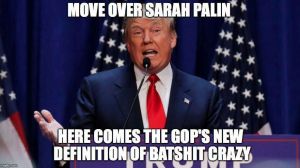 One response to “This weekend I get to feel truly Canadian… except for the hypocracy!”