I can’t believe that another year has gone.  I did blog a few more times than I did in 2018 but the 2019 Review took the longest to complete due to my work schedule.

In 2019 I decided to write a book in the non-fiction department, which seriously absorbed my free time.  I didn’t have a ton to start with but now every time I have a spare minute I fill it with the book.  Writing fiction had its sore spots but non-fiction, even on a topic I know like the back of my hand, is a huge pain in the butt.  The amount of hours I have spent doing research went into the triple digits and might hit 1000 hours before we are complete.

Despite loving to write and needing to work, I found time to sleep in a hammock (or some form of camping with Scouts) for 24 nights plus 4 hammock-nights with Search and Rescue out by Rocky Mountain House.  Then take a week off last June for the Children’s Festival and who knows how many training hours in Search and Rescue and teaching hours in the evening and weekends for Dakemi Software, Scouts Canada, and AdventureSmart.  It is actually amazing that I found time to write anything but we always seem to make time for the things we love. 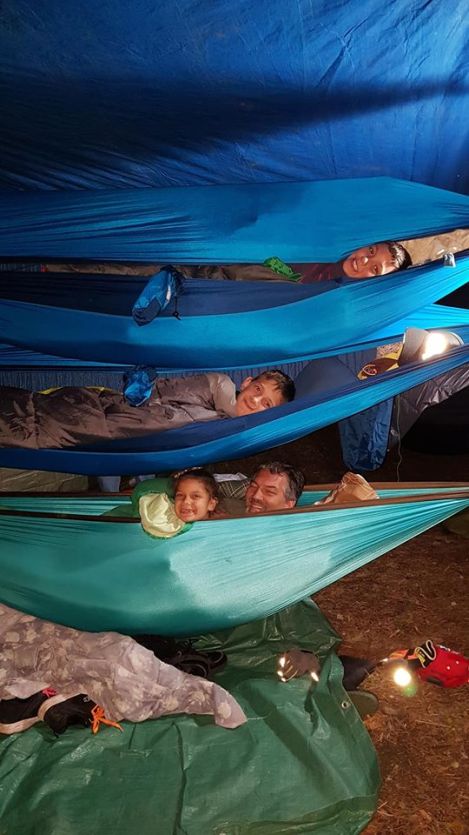 Every year I talk about how I plan to revamp the A2ZwithADHD website but every year I fail to change anything and struggle just to put more postings up there… 2019 was no different.  Thinking back on it now, with 21 new posts, the changes I want to make just seem that much more daunting.

You are probably wondering what was different in 2019, that helped turn the tide for the number of new posts, which had dropped for three consecutive years… the answer is that Scouts Canada went crazy with their lack of documentation and I decided to speak up and help the 20,000 volunteers.  With the new problems with Boy Scouts of America, it seems fitting that there are people up in Canada trying to prevent Scouts Canada from some self-sacrificing slaughter but that is another post.

What about that 500-view mark?

The seven posts gathered 12,022 views together.  The McDonald’s post is still in the top two, after over four years and is the overall reigning champ of views at 34,613.

It is difficult to look at the new followers as followers of A2ZwithADHD because at least half of the new people came from the Scouting posts.  They may love the mindless ramblings of Scouter Ratchet Foo Foo (that would be me) but they almost unanimously love scouting.

The huge difference in followers and post views coming from Scouts Canada volunteers displays remarkably in the referral numbers.  Referrals have consistently been moving from Facebook (where I started) to Search Engines (where people were tracking me down).  Over the four years from 2015-2018, Facebook referrals went from accounting for 82% of traffic to 8%.  In this same time, search engine traffic moved from 5% to 68%.

In 2019 though, mostly due to the sharing of information regarding Scouts being centered on Facebook, Facebook referrals jumped from 8% to 52% of traffic.  The search engine traffic to A2ZwithADHD dropped from 69% to 26% last year.  This is an alarming trend for someone that can see the end of Facebook.  I suppose if I write nothing interesting there isn’t much that will hit for those google searches. 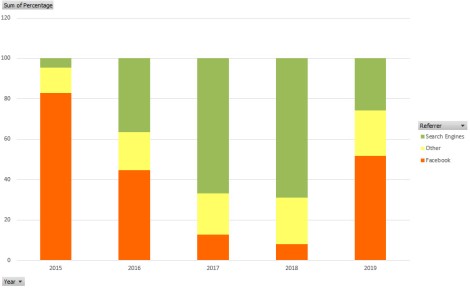 In 2018, the only significant change in the geography of where readers came from was that visitors from countries outside of Canada and the United States doubled from 7% to 15% and stole most of that from Canadian readers.  In 2019 that percentage dropped back down to 8% but there was a dramatic shift between Canada and the USA.

2019 saw Canadian viewers spike back up to near 2015 numbers when nobody was reading anything I wrote.  This change was almost entirely due to the fact that so many volunteers from Scouts Canada started following my blog when I started writing about the changes that Scouts Canada was making to BP&P (Bylaws, Policies, and Procedures). 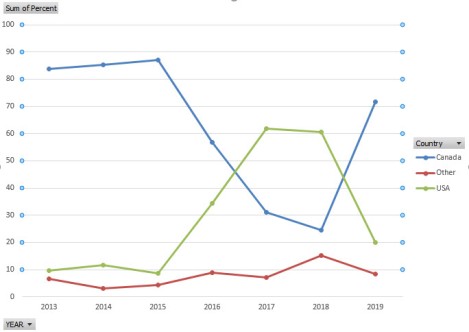 I don’t see these numbers reverting back to the 2017 flip flop numbers unless I write more about something other than Scouts Canada.  I don’t eat at McDonald’s anymore so I can’t even think of what that might be at the moment.

Four of the top seven pages on the A2ZwithADHD site were about Scouting.  I suppose that accounts for a fair bit of my traffic right now.  In the foreseeable future I don’t see big changes here but once the book gets more into editing and less into research I should have a lot more spare time to write… and travel to Europe for 3 weeks with Scouts… maybe there won’t be many changes in 2020 after all.

On a bright note, I will be doing a lot of writing while I am in Europe this summer so who knows what 2020 will hold…