I didn’t post for a long time because I was busy running for political office.

I know that I have spent a lot of time ripping into politicians and laughing at their utter stupidity, but this was a part-time gig so I wasn’t actually going to be a politician, I was still planning on being a geek but I was going to amend my volunteer work with youth groups and teaching with a part time income from our city… but I digress… which explains the name of the blog if you hadn’t figured it out.

Today I need your help. I need you to share this post with everyone you know in hopes that someone you know, married someone who went to school with someone who used to work with a neighbor of the d-bag in this video. You can see him clearly pull up to a house, hop out of his truck, rip the license plate off a car and then drive away. Does he speed away hoping to evade police? Nope. He casually drives away and stops at two neighbors to check out their houses.

My wife hates profiling, she thinks it is an infringement on human rights to be profiled because of your race, weight, religion, height, or anything else you can think of to identify an individual. I think it is common sense to use the tools at your disposal to stop bad people from hurting innocent civilians.

My profile of this dirt bag looks something like this:

Someone out there knows someone who knows this guy. I am not saying that they are friends and would never insinuate such, but they see this clown get in and out of his pick-up truck often and recognize him. He greases up the front of his hair. He wears a 2009 ACDC shirt that looks like it is in great condition which leads me to believe that he just bought it from Value Village or some other second hand store. I am trying to get ACDC representatives to get me a good picture of the back of this shirt as well.

On a side note, I have to make mention here that kudos go out to Edmonton, Alberta for being the most attended and highest grossing show in North America for the Black Ice tour in 2009. That is right Edmonton, you packed almost 59,000 into the Commonwealth Stadium on August 26, 2009 and gave ACDC over $4.7M for the show. That is more money than much larger cities in Canada like Vancouver, Toronto or Montreal but also more than San Diego, Philadelphia, Atlanta, New Orleans, Dallas and Oklahoma combined. You truly are the “city of champions”, despite what your city council says. 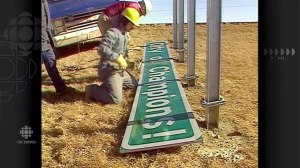 If it wasn’t for the name of this blog I would take some Ritalin before writing these posts. It would save me a ton of time writing and you some time reading but you wouldn’t have as much fun and look at all the great educational opportunities you would miss.

Back to this dirt bag, he is also wearing the weirdest camouflage pants I have ever seen. They must look better in real life because in the video it looks like he is trying to hide in a knee-high fire grass-fire made of green and beige flames.

Can anyone tell me where to get a better pic of these pants?

The biggest clue to this guys identity might be that he still lives in a trailer court or farm where neighbors likely complain about his piles of junk and clutter that would scare Mike and Frank (American Pickers) just as much as Canada’s original “cash cowboys”, Scott and Sheldon, from Canadian Pickers. Just look at the back of his truck from his great haul on October 15th! I can’t even identify half the junk he has back there but he is probably going home to weld together some great modern art for some city council to burn tax dollars on.

This guy’s yard is probably overflowing with the same kind of crap, I mean collectibles that he has in his truck.

The police have sent the video off to some NSA lab to get the missing characters from the license plate. At least I hope they have. I have sent it to Jerry Bruckheimer to see if CSI producers can use whatever alien-tech they use on the show to figure the plate out too. You can see some characters but if you even think that you know who this d-bag is or where he lives or what area of town you see his truck in repeatedly, please let me know by commenting below.