Sorry if I hurt your feelings. Maybe not.

Have I ever offended anyone before? Clearly, if you have read anything I have written you have a clear sense that the answer is a resounding “Yes”.

Do I mean to offend them? That would depend, but I am not one to back down easily and in today’s world there are way too many people who think that their feelings are more important than anything else in the world and I do enjoy letting those people know that many people in the world disagree with them.

I am probably one of the biggest jerks you have ever met, but you only usually get to see that jerk if you deserve it. It bothers me a little that so many people think I am amazing. I really am not. If you are worthy, I will give you the shirt off my back. Then I will give you the cash in my pocket and a couch to sleep on. When you move on, my wife will rip me a new one, but you would never believe it because I am such a nice guy.

If you don’t know who Jackie is, this post is a response to her comment. My response was too long and I really wanted to separate her little rant and my return rant in its own post. You are going to think that I am not very nice to Jackie but let me be clear. I have no idea who this woman is. I don’t even know if Jackie is a woman. What I do know, is that she is pissed at me and has one of the most screwed up world-views I have ever heard of.

She is very upset with me although I have no idea why, I do have a sneaking suspicion that she is not going to like my response to her comment either. Let’s go through this line by line so that she understands my response better than I understood her complaint…

“Just read your unkind words about my daughter.”

Jackie, you have me on the edge of my seat. Who is your daughter and what were my unkind words?

“I will say this much- you harshly judge others.”

I have been told that by many people, including my wife and mother. But those two are some of the harshest judgmental individuals I have ever met. neither of them is wrong about people very often though, and neither am I. It sounds like you think I was “overly” harsh. If this is the case, I will have no problem apologizing to your daughter. You sound like a loving, caring mother. Please tell me who she is…

“I’d love to see someone vilify your child in a blog.”

I take back that “loving, caring mother” bit in the last line. You sound a little crazy now. Who the hell wants to see a child vilified in a blog, or anywhere else? Except for Greta of course.

The problem with trying to prevent vilifying someone’s child is that it is impossible. Every human alive is someone’s child. That is how they are created. Every single one of the 7,598,361,240 people on the planet. And another huge problem is that the younger the child, the less I personally want to vilify them, and the harder I want to go after their parents. Clearly, if a “child” is doing, saying, or believing something that is so messed up that I decide to write about them, then it is more likely than not, that I really want to go after the parents for their failures (see Greta above). So who is your daughter anyway?

I am going to count this as one sentence. That is how I read it.

You have me, 16 is young. It is hard to believe that I would attack a 16-year girl in my blog. I have to guess (see comment above), that I was at least partially ranting at her parents, whom I probably did not know… until now. I am already starting to get worried about how her brain is developing if you are her role model.

“You are a father of 9 and you think your opinions are ok to be out there in the world for her parents to see?”

Yes, Jackie. I absolutely do. You see I don’t live in China, Russia, Venezuela, Iran, or another of a handful of countries that punish people for speaking their opinions. I actually live in one of the freest countries in the world. I mean it isn’t the USA, but what else is right? And they are probably one of the saddest places in the world right now so… let’s try to stick to the topic here and ignore the squirrels… If I wrote it, I absolutely think those opinions are “ok to be out there” and as her parent, I would hope that you showed them to her. You could use them to educate her that there are some people out there who disagree with her and think she is going down a bad road.

You will probably use it to show her that there are evil people out there and she should become a full-fledge SJW or psycho liberal housewife… because hey, great parenting never ends. But please Jackie, who is your daughter?

We don’t really have to go into this because clearly, I believe my guaranteed right to freedom of expression is just as important as your freedom to act like a whiney little Nazi trying to shut me up.

“Moreover, she may have read this or will come across it someday…what good have you done by writing such horrible things about a minor child?”

Well, I have already established that I probably wrote the post in hopes that she would see it someday. Possibly, I was hoping that her mother would find it and open her mind a little. I was likely hoping that my writing would make your daughter smarter, stronger, more enlightened, and potentially even change her course before she started dating one of my sons and had the wake-up call of her life over dinner when she espoused whatever character trait that made me write about her in the first place. And what does her being a minor have to do with it? What did she do to get so under my skin that I wrote something so disturbing about her? And who on God’s green earth is your daughter?

“Think next time before you spew your disdaine for someone’s child online.”

We have already clarified that everyone is someone’s child. I will have you know that I typically think for many many hours before most of my posts. Some of them have required dozens of hours of research and editing. I believe there are more than a couple that I have worked on for well over 50 hours. Let me be clear that I rarely “spew”. Even this reply to you has taken me three days to type and I am still not ready to share it with you. My comments are calculated rants and should not be taken for casual spewings in anger.

I have been known to “spew” though, so I will hold judgment on that line until I figure out what post you were talking about and who your daughter is and why I hold such disdain for her.

Really? That’s it? Jackie, who the hell is your daughter?

So you posted that comment on my “About Me” page why? So I couldn’t figure out who your kid was?

Do you realize that there are over 200 posts in here and I have no idea who you are talking about?

I have talked about a woman getting arrested in Australia but she was more than 16… and I didn’t say anything bad about her.

Is Emily Lee your daughter? I ripped into her over her feminist rant filled with lies and hostility toward an entire gender… if that girl is 16 then you need to tell her to open her mind and stop propagating lies and start writing about facts and passion. She is not a bad writer and I enjoyed her writing… except for all the lies. And now you know what I think of whining snowflakes.

You can’t be talking about Natalie because I applauded her fortitude in standing up for her right to free speech… and she was 17.

Janet French can’t be your daughter… she has to be older than 16… but if not, she has zero integrity, which I jumped on her for in the post about the utter lack of journalistic integrity in our world today…

Is your daughter the SJW I ripped into about destroying her own daughter in her youth? I doubt that she was having kids that young.

Was your daughter holding up some sign espousing racist sentiment in a post about why I don’t like the idea of killing police? Probably not. I didn’t have much to say about these idiots so I just put pictures of them online.

Jackie, I simply don’t have time to go through all these blog posts. Help me out girl. Please… 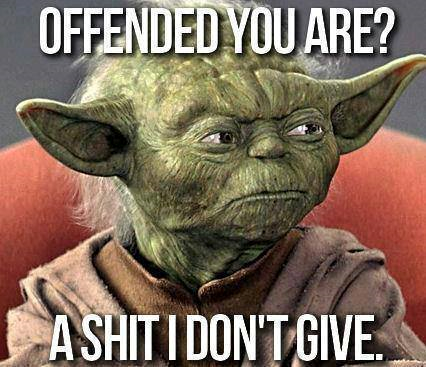