I just got back from a movie called “Scouts Guide to the Zombie Apocalypse” and being a proud Scouter and father of youth in four different sections in Scouts Canada (Beavers, Cubs, Scouts and Venturers), I was very curious as to how they would do this movie without ticking off Scouting organizations like Scouts Canada and the BSA (Boy Scouts of America).

Scouts Guide to the Zombie Apocalypse

Needless to say they didn’t care too much and the BSA is not impressed by the movie, and now that I have seen it I totally understand why.  The movie worked hard for its R rating and does not represent Scouts as the perfect youth who would never do things like:

But now let us look at a few of the things they did in the movie to prove they were scouts:

What scouter wouldn’t be proud?

Among all the other reasons that the BSA is not going to be impressed about this movie, they do not want people wearing uniforms for costumes.  I think that Bryan, one of my favorite Scout bloggers, tends to agree with them and so do the vast majority of his followers.

Some Scout Shops do not even allow purchases of scouting uniforms for costumes.  What do you think?  Here are some comments I found online in response to Bryan’s blog post…

“The uniforms should be worn with respect and never for a costume”.

“They shouldn’t sell uniforms without ID to prevent pedophiles from getting them”.

“I’m ok with Scouts dressing up as Scouts, but non-Scouts will only do it to mock Scouting. Good for that Scout Shop. I hope it’s a national policy.”

The BSA has actually gone after some entertainers (Alice Cooper, Axel Rose and the band Dentiny’s Child pictured above) to get them to stop wearing their uniforms and sends letters to Goodwill and the Salvation Army to ask them to remove the used uniforms from their stores.  They have an added incentive in that used uniforms can take away from their profit at scout shops but if I own a thrift store and some group tell me to throw away some of my merchandise because it hurts their bottom line I would simply tell them to buy them.

Opinion are just that!

Let us get this out of the way right now.  This post is my personal opinion and does not reflect the opinions of Scouts Canada, the BSA, my council, area or group.  I am sure many of them actually disagree with me, but that is the beauty of living in a free country, they can.

You have to understand that this blog is being written by the guy who wrote “The A-word in Scouting” so don’t come down too hard on me.

Wear the uniform with pride…

Now back to these complaints… First off, I agree that the uniform should be worn with pride but I believe the same about police and firefighting uniforms and have seen male strippers use them in ways that might not be considered honorable… but I don’t see their organizations putting a stop to it.

Not selling them without ID to stop pedophiles sounds a little insane.  Requiring ID would make it impossible to get kids dressed up for meetings.  With the Internet and thrift stores you will never stop a pedophile from getting a uniform if he/she wants one but that is why we have all the protections and training in place so that other scouters and educated scouts can be aware of dangers.

As for non-scouts being prevented from wearing the uniform, there is nothing you can do nor should you be able to.  We are supposed to love and promote freedom and it seems a little nuts that you think you could stop them.  Even wearing a police uniform is not illegal until you do something to actually pretend to be a police officer.

A quick aside here that there are many people who wear the uniform to elicit a certain response by wearing it a little different… for these people I say express yourself.  Enjoy your freedom.  It does not portray scouting or what scout volunteers look like.  It is worn to warm the hearts of men and it does.

Women have done this with nurse uniforms forever and nurses don’t lose their minds.

On that note, if we are doing our jobs right, a non-scouting youth should be in character in his scout uniform costume and should be acting respectable and honorable because that is what people think scouts are.  Scouts don’t steal or litter (I am sure some do) so in order to dress up as a scout you would be doing more than just wearing the uniform.

When my son dressed up as a zombie he acted like a member of the living dead.  When he dressed as Captain Jack Sparrow he acted drunk.  While that was the most un-scouting thing I had seen at a scout meeting, the judges awarded him best costume, not because the costume was great, but because he was in character.

I can only imagine how amazing Halloween would be if every youth dressed up as scouts.  There would be no candy stealing, no bullying, no pushing at the doors and old ladies would be helped across dark streets, all because every kid out that night would be in character of someone who was upholding scouting ideals or even their perceived ideals.

I do admit that when I saw the picture of John Travolta in a scouting uniform it bothered me that he was wearing a Gilwell Necker and beads as well as a woodbadge I woggle (assuming he hadn’t actually earned any of them).  But I got over it quickly.  First off, the picture came from the internet so was probably not taken as much as it was made and it wasn’t like the actor was pretending to be something he wasn’t. 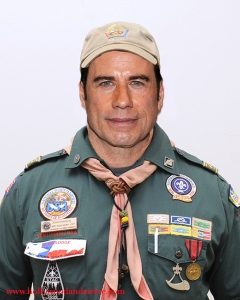 John Travolta purportedly dressed like a scout master for an audition

I am more upset that he could actually buy a Gilwell Necker.  I am ticked that someone sold theirs!  Just this summer I saw a Gillwell necker at a badge trading table at PJ2015 and when I asked where he got it the youth simply said someone traded it to him.  I gave him a badge and appropriated it.  I told him why I was taking it and told him I looked forward to giving it back to him after he had worked for it.

I think that those of you who hate the ideas of non-scout youth dressing as scouts, or adults dressing as scouters, are all a little high on yourself.  What do you think you could do to stop it?

Treat the Uniform with Respect

I understand people being upset because the uniforms are not treated respectfully always but there is no way to enforce that, not even within scouting.  As for people who say I can’t wear one for Halloween I say too bad.  I own the uniform.  I understand Scouting organizations not wanting their insignia on uniforms on non-scouters which is why Scouts Guide to the Zombie Apocalypse made their own uniforms and badges (I love the one with the handgun).

Katy Perry had a Guiding uniform made for her “California Gurls” video… yes, the one where she was butt naked on a cloud. 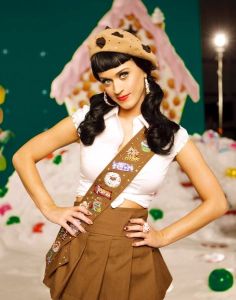 Madonna made her own uniform and wore it to the GLAAD awards (another link) where she chastised the BSA for not allowing gays (Scouts Canada allows them by the way).  See more about that in my “Scouting in a Gay World” post,

Blondie and the Muppets

I understand the BSA viewpoint on the movie.

“The characters in the film, referred to as ‘Scouts,’ are portrayed wearing uniforms with badges and other design so close to the BSA’s official uniform that moviegoers might assume the characters are actual Boy Scouts,” the post reads. “To be clear, they are not.”

Most of us get that they are not “actual boy scouts”.  They in fact are actors, pretending to be scouts in a movie.  What a novel concept.

On the uniform topic though, I can’t imagine how many people are going to be looking for the “cool handgun” badge in the next few months. 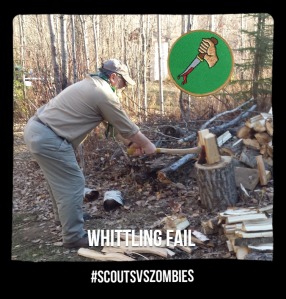 There are a ton of cool badges on their website… here are some of my favorites for you to peruse now that I have nothing left to talk about.