First and foremost, I need to say thank you to America for voting with enough common sense to terminate Hillary Clinton’s second run at the Whitehouse. I actually pushed to have her on the Democratic ticket in 2008 but some unknown got the nod from the Democratic Super Delegates. I am starting to see a pattern here with the Democrats and it scares me.  In 2008 I totally agreed with Hillary but somehow she was ousted before the big race began (probably not a bad thing with her recent track record).

In 2016 Hillary got payback when she somehow got super delegates to snuff out the campaign of Bernie Sanders when he was destroying her in public votes. But lucky for us when the voters spoke last night they said they would rather take a chance on Trump being a decent or great President than have Hillary corrupt the office for four years.

For those Hollywood elite liberal left who want to move up to Canada, please take a long walk off a short dock. We have more than enough socialism up here to keep us going. We don’t need your crap. We are in a fight up to our elbows with politicians spending obscene amounts of money on absolutely nothing and showing total and utter lack of concern for the well being of our nation and our people .

We have a few shining lights like Premier Brad Wall in Saskatchewan but for the most part we have D-bags like Bernie Sanders (yes, I am talking about you Trudeau, Notley and Wynne) trying to bury our economy in such a rut that my grandchildren will be digging us out. If you want to send Donald and Kiefer Sutherland back to Canada I won’t stop you because they were born here but all the Marvel guys can stay the hell down there and give Trump a chance to do 10% of what he promised.

I would love to see him eliminate some tax loopholes like the carried forward deductions that have allowed him to avoid federal income taxes for so long. He has the opportunity to say “screw you” to the corporate elitists on Wall Street. They wanted to have Hillary in power to maintain the status quo because none of the richest want to start paying more taxes but Trump has said that the loopholes in the system are wrong and now he has the chance to fix it. 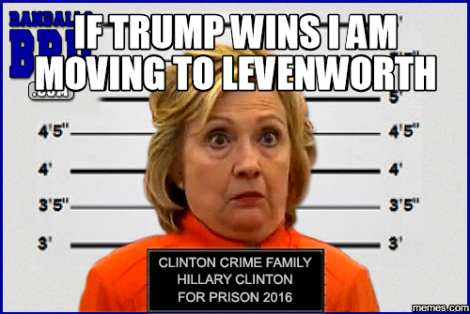 My last hope is that the Electoral college follows through.  Like I said in a previous post, if ever there was an election where the college would vote for a different President than the people, this would be it!

I will be waiting for January with bells on in hopes that the December vote chooses the same president as the people did last night.

The Irony Of It All

In perhaps the biggest kick in the butt for irony… in 2017, Trump will move into a smaller house and go from being worldwide business man to public servant… and just like Aladdin, Trump gets to be the most powerful man in the free world, owning the senate and the house he will basically get to change any laws, and will control the most powerful military force on earth…  and he gets a pay cut with a paycheck of just over $400,000 a year and with that comes a tax bill of over $80,000 a year.

That’s right Trump, no accountant will get you off this one because employees don’t have the same deductions that businesses do and you are about to get a rude awakening.

Hopefully this slap in the face will encourage Trump to stand up for the fight he has been touting and he can push through a more ethical tax code.

Hopefully he can mend fences with Russia and basically the rest of the world.

Hopefully he can stop supporting a military conquest agenda that America has propagated for so long.

Hopefully he can solve America’s illegal immigrant problem like other countries have.

As for Canada, we don’t need an illegal immigrant problem so effective immediately we are stopping democrats from flowing North by building a wall.  Guess who is paying for it Donald?