People keep wanting to kiss 2020 goodbye with a boot, and welcome in 2021 with open arms. I don’t know how these people can be more oblivious to how bad 2021 might be. Or maybe they are eternal optimists trying to talk good things into existence?

My problem with the new year excitement is that I can’t see a single way in which 2021 is going to be a better year for anyone than 2020 was.

Do you remember Air France flight 4590? The Concorde that exploded after take off and took 119 people to their graves? That flight was the beginning of the end for the historic plane.

Do you remember mad cow disease running through Europe?

Do you remember Al-Qaeda attacking the USS Cole and killing 17 American soldiers?

Do you remember the US election between Bush and Gore going so sideways that it defied logic? The voting was so close in Florida that Gore demanded a recount in four counties… but didn’t want to recount any others. The story was mind-boggling and made me wary of American election systems two decades before the recent fraud affidavits were abound. The world sure would look different today had things gone differently in Florida in 2000.

First off, in the eight years of Clinton rule, terrorists were given a blank slate to do whatever they wanted. It was a radical change from the Reagan era where Americans went in guns blazing to defend themselves. Clinton wanted world peace above all and many Americans paid for that ideological path with their lives.

Before you decide that you want to start a fight over my opinion, you should hear it. I am actually unsure of whether I disagree with Clinton on the idea of not reacting with an eye for an eye mentality on a world stage. Clearly it worked for Reagan, in that it did not take much to push him over a line and when he was pushed too far, you rarely heard of that person again.

I remember thinking that Libya was going to be the next Russia the way that the media was talking about them and then Reagan blew up Gaddafi’s palace (don’t even get started on how to spell his name either). The point is, before 1986, Libya was a huge bad guy. After 1986, we just never heard of them again.

For the most part, this is the media’s game. They found a new bad guy to start pushing on the American population and back then, that was the only source of news available. Make no mistake, Gaddafi did not go away as fast as the media made it look, and had Clinton responded to Al-Qaeda for the 1993 World Trade Center bombing in Reagan fashion, there probably still would have been a 2001 attack. Radical Leftists would have you believe that Clinton responded perfectly and Reagan was a war-monger. The Radical Right would have you believe that if Clinton would have taken Al-Qaeda to task in 93 that the WTC towers would still be standing.

Then we could go into the whole conspiracy theory about the real reason the WTC towers fell, but that is another blog post… or book.

I can’t see how anyone will complain about 2020 after 2021 gets rolling. 2020 was the worst year of my life and it had nothing to do with any virus or any government’s reaction to it.

I have been helping my wife home school our children for the past few decades and I have told them many times that the most important thing they could ever get from their government is free speech. Only America guarantees free speech but countries like Canada, and most western nations, share similar beliefs. The practice in the other countries is a little less than ideal, but when compared to countries like Russia, China, Saudi Arabia, India, Cuba, and many others, you can see why I would rather live in Canada over many others.

I have always loved that Canada shared many of the same values that America idolized, but recently we have started moving away from many of those values and I have found myself contemplating a move to America more often.

In 2020, something changed. Free speech no longer became the most important thing you could get from a nation… or at least I found something that rivaled it.

In November of 2020, the USA had a presidential election. I was hoping that Trump would win because he clearly had the best economic record of any leader America has ever voted for and after the covid-19 reaction, the US could surely use some economic relief. I was also hoping that Biden would win because our Canadian dollar was hit hard by a combination of a Trump economy in the US and Canada re-electing a spoiled child who knows less about money than my children to the top-seat in Canada. There is little hope of Canada getting anyone intelligent for a Prime Minister, but if America could elect Biden, a life-long politician and corporate sell-out, the American economy would absolutely suffer and the Canadian dollar would gain back some of it’s pre-Trump value.

I know, I sound like a selfish dick, but I have a family to take care of and I may love America, but if enough idiots would rather destroy their economy than have a brash asshole in the Whitehouse, then who am I to disagree with them.

The biggest disaster of my lifetime is not a war, a space shuttle collapsing, or towers falling from the skyline, and it certainly isn’t some virus that we survived a decade earlier (we can argue about Covid-19 being worse than SARS in another post). It is not even a global decision to destroy small businesses to bolster large corporate interests while crushing civilian rights in the name of protecting people from the same virus that was barely reported by the media a decade earlier when SARS hospitalized 200,000 Americans.

The largest disaster in my lifetime was witnessing the utter collapse of America and its freedoms which started with one huge action, the elimination of free and fair elections.

You can argue with me that there was no election fraud but you would be a fool. You can argue that Biden won the election and there, I could not argue with you. It certainly didn’t look like he did, but it was possible. But the facts and clear, the election was hijacked and America is now for sale.

“There is no evidence of election fraud!”

Don’t be an idiot. Of course there was evidence. Hundreds upon hundreds of affidavits were signed by people saying that election rules were compromised. These people didn’t often say that people were cheating to help Biden get elected, they said that the rules were being broken.

An affidavit is a signed statement saying that you are willing to repeat an allegation in front of a judge and if you were caught lying, then you would face ten years in prison. These people had nothing to gain and no jobs to protect. They were volunteers trying to stop illegal actions and they were summarily ignored by the judicial branch of the US government. They were mocked by the media and a huge percentage of the American people. Nothing in my lifetime has disgusted me so much as people shaming US citizens for upholding American laws and values since seeing American citizens spitting on soldiers returning from war. And it was very close on that one.

If there were a dozen affidavits I might be tempted to ignore them as “inconsequential” to the result, but they can’t ever be ignored on their existence. These activities needed to be investigated and acted upon, but they were not.

One stinking huge pile of evidence

If it was only a dozen affidavits too, then you would have a predicament to ponder, but it was hundreds of them.

…And video evidence that election laws were broken while people scanned ballots without oversight (ignoring that the video looks like hidden ballots were being counted).

…And then there is that very suspicious video of little red wagons being snuck in the back door of an ballot-counting station without going through security like everything else that night.

…And if that weren’t enough to at least question the election results and instigate the standard recount verifications that happen in most elections in the US, there are more statistical anomalies than you could realistically write into a credible science fiction novel.

When you have a state like Pennsylvania receive 700,000 more mail in ballots than they sent out you should be questioning your election system.

When Pennsylvania election officials question why the election results have 200,000 more votes tallied than they say were counted in machines, you should be questioning your election system.

Going to bed on election night with eight states too close to call and in the morning all of them are, not one or two, but every close state, is now not only not close, but the party who was leading last night is now losing, at what point does your common sense kick in and you question the results.

I have no idea who actually won the election but neither does anyone else. Nobody can guarantee that they know because the election was clearly rigged. Only a fool will say that there was no fraud involved and the fact that so many media outlets have declared that there was ZERO evidence of election fraud, from the NY Times, CNN, NBC, Facebook, Twitter, Google, YouTube, and the list goes on.

Remember that last line about fools? Apparently, the people saying that there was no fraud could be fools or a criminally inclined organization bent on destroying the freedoms that so many Americans have died to protect for the past 250 years. 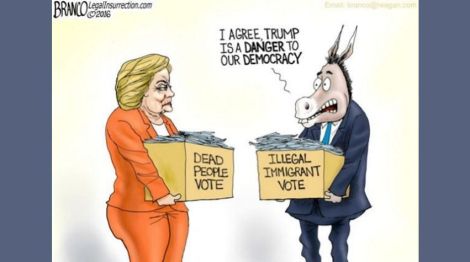 But corruption is nothing new

Corruption is nothing new, so why do I think that it will be such a bold influence on the negativity coming in 2021?

Firstly, because it follows unprecedented division in America and the world. Political correctness has pushed the boundaries of sanity and we have people being physically attacked and had their businesses ruined for speaking out against racist groups like Antifa and BLM who consistently attack white people for being white. This has been promoted and celebrated by the government for years and will continue to be so until the only viable solution to such attacks on American freedom… is civil war.

Which brings us to the only outcome I can see from 2021 which is another USA civil war or the dissolution of the USA. Their constitution is actually based on this exact scenario where the government acts in ways contrary to freedom and forces the people to rise up and take back power from their government. It is how America was formed and the only way I see it being reborn.

As sad as it is, America either disappears and the USA dissolves or becomes Venezuela 2.0… or millions of people die in a fiery civil war.

Unless Americans on whole decide to stand up to this corruption, and I mean all Americans, war will be the only way to save that once great nation from the hypocrisy that is burying it right now.

December 2, 2019, Washington, DC, United States of America: Gun safety advocates rallied in front of the U.S. Supreme Court in Washington D.C. on Monday, December 2, 2019. For the first time in 10 years, the U.S. Supreme Court was hearing a major gun-rights case. At issue was a New York law, since repealed, that allowed New York City residents to have a permit for a gun at home but barred them from transporting the gun elsewhere, with minor exceptions.The sign reads ”My Weapon of Choice [the ballot box].” (Photo by Jeff Malet) (Credit Image: © Jeff Malet/Newscom via ZUMA Press)