The saga continues with Alberta Education’s attacks on Alberta Education. The government has closed the largest home schooling group and told families that they have two weeks to notify (they actually keep using the word register) with another school board but I have a few problems with that.

I refuse to switch schools at this point. While Alberta may be one of the few places in the world who will pay you to teach your own child, and the only jurisdiction in Canada that I am aware of, it also has the toughest regulations in the country for home schooling.

I have done what the law requires of me already

I did my job.  I notified and Wisdom accepted.  I am now home schooling 5 youth for the 2016-2017 school year. I now need to have two meetings before the end of August to show progress in my youths’ studies. This of course is a grey area but if I had these meetings in July and August I have not broken the law. Heck, if I had them both in the last week of August 2017 I have not broken the law.

The government perspective is that the law says that I NEED to be registered (seemingly 24×7) with an accredited school board. If that were true, and they took away my school board, especially if they did it illegally without due process, then why on earth would it be up to me to resolve their concerns about me not doing my job?

Again, if you aren’t used to how I write, I like to throw facts into the writing, like the line above. If you don’t believe that they want us to then listen to their words, not mine…

I have spent 40 hours reading court documents, a School Act, the Home Education Regulation and numerous other documents. If someone could find the part that says I have to do more than what is stated above, please let me know. You will be looking in Part 11 Section 13 of the School Act (alberta-school-act_s03_2015-06-01) I believe.

Illegal Actions by Your Government

We have already discussed how I feel the actions of this government in closing down a school that they admit did nothing wrong except follow previous government orders. Here is that blog post and there is another coming.

When we get out of court today you will get a copy of the Trinity affidavit (I will post it if possible) which will rip into this government’s 37-page financial review which was written by propagandists and not anyone who understands anything about business or accounting.  I can’t even imagine how people like Mark Swanson, Matt Grossman and Brad Smith have jobs after this debacle, let alone David Eggen and Curtis Clark.

What has happened to Trinity and Wisdom?

They are the largest Home School group in the province. They are being bullied by our provincial government, a government in which both the Premier and the Minister of Education have both spoken out against Home Schooling. After promoting anti-bullying campaigns, I am saddened by grown people promoting an agenda of bullying like this but they consider this a war on their ideology. Most Home Schooling parents are either Christians or politically right or both and what use does a socialist government have for a system of education that allows parents to teach whatever they want?  None.

Keep in mind that education systems are typically the engine of a socialist government. The education system is how the society and government indoctrinate youth. If you weren’t aware that post-secondary education is basically a liberal breeding ground for socialists, well, sorry about those tuition fees you paid for your kid.

Today we have youth graduating from Harvard calling for the dissolution of Academic Freedoms. Ever since Sandra Korn, these liberals want to stop all research that is carried out contrary to the schools published views. If research doesn’t agree with their opinion, it should be illegal. I don’t even know what to say about these people.

What do Albertans Think?

Believe it or not, there are still some people out there who believe in their government, even after the myriad of stupidity this past year has produced. It is hard not to be cynical when the US election is so near, but that is a whole other blog post.

I just want to say that if you want to believe everything your government says, even after refusing to read their ridiculous review, then welcome to the farm.  We will always need sheep. Yes, the animals that follow other sheep around and do nothing but wait for a slaughter or shearing.

Then there are people who choose to be educated or at least informed. Some of these people are skeptical like myself but after reading a few things it didn’t take long to realize that the NDP government is going after all Home School boards and this is just the beginning.

At the Edmonton meeting that AHEA (Alberta Home Education Association) I had the opportunity to talk with a few people who really made my day. First and foremost was Anthony. This guy was awesome. When I told him I wrote for A2ZwithADHD he instantly said he loved some obscure blog about how I write (or don’t write) and I was quite shocked. He gave me a very cool quote which you are definitely going to see in a future blog as well.

I also met Dan Vandenberg who asked a question on a parent-directed program. His wife got a call back from the government the next day and the person who called really didn’t understand anything about what home schooling was.  Dan’s wife had to explain to them what parent-directed home education was.  What I wouldn’t do for a copy of that phone conversation. These people closed down a school board without even knowing what they do for the people that pay their wages.

How on earth are these people in charge of Education?

What is Next for Wisdom / Trinity?

A lengthy court battle. There is no other way to look at this.

Today they go to court and I suspect that a judge will look at the affidavit and grant an injunction allowing 3500 students to get back to school.  Then a lengthy court battle will go forward which will determine the direction that Home Schooling takes for the next decade.

If you believe in freedoms and rights and responsibilities like me, then you need to get behind this fight. You need to stop talking about the government on Facebook like they are there to help you or anyone else.  They are managers on the best of days.

If you feel the need to criticize someone on Facebook, at least inform yourself first.  Read the Review. Analyze it. Read something from other educated sources (please try to find something better than my blog). Do something other than following the latest funny quote that got through the socialist guardians on Facebook.

Why did the NDP go after Trinity?

People doubt that the government would have gone after Trinity to test the waters. They would have shut down a small school that nobody noticed and then slowly moved up the ladder but this strategy was actually pretty smart, likely the smartest thing that this government has done.

They attacked the largest thing on the battlefield. If they win, who would challenge them after decimating Trinity and Wisdom? If you haven’t heard this story yourself, check out 1 Samuel 17. It is a great read.

The problem is that they have kicked the wrong kid in the wrong province and in this day and age we don’t put up with bullying. Today we stand up against it.  We crush it where it stands so that others can gain strength by what we have stood up for.

Rachel Notley, David Eggen, Curtis Clark, Brad Smith, Matt Grossman, Mark Swanson… you are the bullies and you are about to see what Albertans do to bullies.

The next post is not looking very nice. You guys dared to drag your liberal media groupies out and condemn a school board for doing what the government has failed to do, properly educate our youth. You want to strip our citizens of their rights and freedoms and that is not happening while I have a breath left in my body.

You want to talk about money mismanagement and organizational corruptness, well bucko you should have chosen your victim more carefully. We are about to rip into your 37-page review and your implications of financial mismanagement. I won’t blame you for all of it but you played the corrupt media like a fiddle and I am going to play my part by crashing your party.

Could the two families that run Trinity and Wisdom be the corrupt people that you speak of? Could they be thieves and embezzlers? Possibly. Unfortunately for you however, I know how to read and it didn’t take much to figure out that you don’t understand math or accounting which made me question your entire 37-page report and then your motive.

Quick question, you require school boards to audit their financials with a third party every year but then you send up hacks from internal government offices to do in-depth reviews.  You might have better chosen to follow your own rules and asked Deloitte or KPMG to do this. It might have saved you a ton of trouble in the long run.

But you didn’t and I am going to hit publish and get back to typing not-so-nice things about your review. It will include comments on the wages and salaries of employees and teachers, and how they are justified, or not justified.  I have to tell you that I was definitely shocked when I learned of some of the numbers. There are definitely questions to be answered and heads should roll.

For example, how on earth does someone justify paying Mark Swanson, Director of Field Services for Alberta Education, $168,628.33 to shut down school boards without even trying to find a solution to help 3500 youth?

We are going to talk about expenses and there are some huge questions to be answered… like how on earth does a school board think it is acceptable to claim “funeral expenses”.  But the government has nothing to do with that, it is a CRA question, maybe an RCMP question.

We are also going to get into the timing. I am so tired of idiots, I mean uninformed people, talking about how this investigation has been going on for several years. You people need to slap yourself and wake up. This investigation started with a demand on July 29, 2016. Period. The government required three years of business data with 2 business days to prepare across a long weekend. We are so going to delve further into the schedule and you Social Justice Warriors and Psycho Liberal Housewives are going to get the beat down and I have a sneaky feeling that the law will be on my side at the end of the day…

Court starts soon… time to go pray that stupidity doesn’t rule the day… and that someday it will stop ruling our legislature. 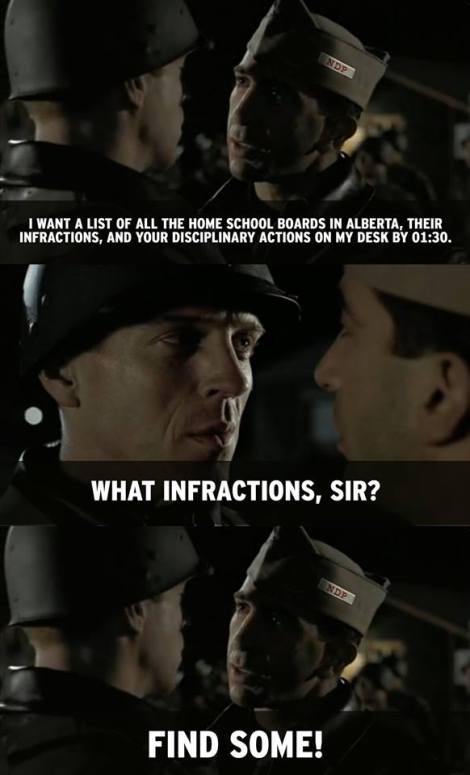 9 responses to “This is me, standing up to a bully!”