I would like to take a few minutes to tell you a story about Alberta’s Premier, Rachel Nutley, and how she decided to save some money.  You heard me right.  The NDP government is actually going to put a wage freeze on public employees.

How many government workers are there anyhow?  A little digging (by Rebel Media, not much on my part) brings up this wonderful video talking about some new statistics from Ottawa showing 421,700 public employees living in Alberta.  These are people working for a local, provincial or federal government, for a government service or agency, a crown corporation, or a government funded establishment such as a school (including universities) or hospital.

If you haven’t seen any Rebel Media videos it is probably because you are a bleeding heart liberal who loves our free healthcare and paying into huge governments to buy their every whim.  Or maybe you didn’t realize that the mainstream media lies, colludes and covers up anything they deem worthy (this is too long a list for my blog).

How bad did Ezra Levant exaggerate?

I dug through the StatsCan site to find the table he references.  Indeed, the numbers are the exact same as reported in the video.

Young workers are screwed.  In the past 12 months, 15 to 24 year olds have lost 21,000 jobs.  The NDP just wanted their votes, now their true colors come out because the NDP love unions, not minimum wage earners.  At this point, something has to be said about Rachel Nutley not having any conflict of interest with unions like CUPE, which is where her husband, Lou Arab, makes a luscious living. 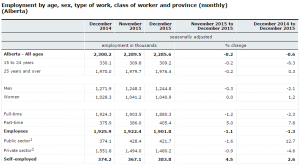 The private sector has lost 71,000 jobs at the same time that public sector employees have grown by 47,600.  I agree whole-heartedly with Ezra that this is insane.

But here is a new twist on the story…

I need some help with research here because I can’t find anything to tell me where the APS Non-Union workers came from.  Memory tells me that they were offered non-union positions which would get all the benefits on the union positions and follow their collective agreement.  The pro is obviously no union dues.  The con would be that you 7000 non-union workers would be forced to work every day if ever a strike was called.

Non-union employees were put on a wage freeze about 6 years ago.  Their union compatriots continued getting raises which never dropped below 3%, even during King Ralph’s historic budget cutting (in his last year they actually hit 4.9%).  This means that non-union employees making $50,000 a year in 2009 are now about $9700 per year behind their unionized co-workers.

The NDP saw the amazing injustice and immediately handed out some raises.  A typical non-union worker-bee got an immediate 2% wage hike.  That $50,000 person is now making $51,000.  Maybe it was the thought that counted?  At least there is a light at the end of the tunnel… they are back on track at least getting raises again for the first time in 6 years.

Then the NDP saw it in their heart to hand out an almost 9% pay hike to provincial judges bringing them from $264,000 to $294,000 which includes two year retroactive raises and two year proactive raises.  Does anyone know a non-union, non-judge, non-management worker at Alberta Justice that received more than a 2% raise?  I don’t.

And now the end of the story…

And now here is a sad ending.  Six months later, those 7000 non-union workers, who are still making $8700 less each year (based on that $50,000 base salary) have found out that the light at the end of the tunnel is a train, a big orange one called the NDP.  Joe Ceci, the idiot that Rachel Nutley put in change of finances, has just put another 2-year freeze on these poor people.

Don’t tell me to stop calling him an idiot.  He is supposed to know something about money and he just said, and I quote…

First off, bullshit!  You made it very lightly.  You couldn’t touch the unionized workers (and what would Rachel’s hubby think of that anyway) and you already took care of the judicial branch so you screwed the ones who volunteered to save your ass if the unionized group strikes.  Nice.

Secondly, bullshit!  This amounts to a savings of $28.5 million dollars a year.

How could this actually happen???

This is the NDP who gave away $325  million in their first couple months as sole-source payments to old and new friends (for those who hate Prentice’s PC party, without them, these sole-source payments would not be public information).  This is the NDP government who has already, in just over 6 months, bumped our provincial debt from around $11 Billion to over $16.7 Billion.

If only Joe Ceci’s PowerBall numbers would have come up.

Who wants to make a bet that lines at public buildings got longer on Thursday.  Do you blame them?

If you know someone who can remember how the non-union public employees came about and if there was anything in writing about whether their wages were to match unionized co-workers, please comment below.  I am old and my memory is not what is was this morning.

14 responses to “Hey Alberta, Want to Hear a Story?”