I just re-read this post and I can tell you that I am going to tick some people off. But they need to read this as much as I need to write it. For me, it is a combination of therapy and anger management… for them… who knows.

I have been a volunteer for Scouts Canada for many years and always thought of our organization as inclusive and accepting of everyone. Mostly this was due to the fact that I am so close, geographically, the the BSA (Boy Scouts of America) and many feel that the BSA is a group that is so close to the opposite of ‘accepting’ that they are the world’s poster organization for anti-inclusivity ( no girls, no gays, etc).

Sulu (George Takei) rides in a gay pride parade in a fake scout uniform to condemn the BSA’s non-inclusive stance.

Many have said the same about Girl Guides. Girl Guides is exactly that, guides for girls. They don’t allow boys. So maybe Scouts Canada is just a great group filled with more acceptance than anyone else? Not even close.

I would love to blame our national organization. Lord knows I have butted heads with them enough and disagreed with many of their decisions and actions… but I butt heads with lots of people, so that shouldn’t set them apart.

Unfortunately, my problem with Scouts Canada not being very open to new ideas has absolutely nothing to do with the organization at all, but the volunteers that run every section and group across the country.

Don’t read too much into that line, I love these people for what they give and their amazing energy and I choose to believe that a vast majority of them would read this and think I was crazy.  The fact that they are so willing to help today’s youth become tomorrow’s leaders speaks volumes about these people. But many of them, not all of them, let their personal views get the best of them sometimes.

I have been guilty of this many times, and not many are as twisted as me. I taught scouting youth some odd lessons, like how credit card interest worked and just yesterday, the definition of “art” (as we decorated walking sticks), but I tried to always teach them how to keep an open mind with everything from social conduct and spirituality and packing a tent to accepting differences in others.

In this last one though, I have to say that I am not in the majority. I recall fuming over the Hooters fiasco last summer and finding out that I was not even in the majority with my opinions. I am talking about the summer camp in Colorado that was sponsored by Hooters restaurants.  Some mom lost her mind when she showed up to pick up her 7 year old and found him surrounded by young women wearing Hooters visors.

I would totally understand if that was all that they were wearing but they were dressed just like everyone else, but with their corporate hats to show who was paying them to be there.

They are young waitresses working for a food chain that promotes food served by scantilly-clad staff. I could be talking about Earls, Moxies or a dozen other chains, but Hooters decided to sponsor these youth and their camp and this mom decided that she would take this opportunity to let everyone know that she was a politically correct Social Justice Warrior.

I mentioned this last year and was told by a couple other scout volunteers that they totally understood that mom’s reaction.  I was dumbfounded. I bottled up my disdain and never posted anything. That was a mistake.

I have worked for several camps over the years and know the value of corporate sponsorship and I wouldn’t even hesitate to accept sponsorship by Hooters with any camp I was volunteering for (you can contact me on Facebook if you want to sponsor a Scout camp in Canada).

These righteous people who were offended by Hooters and the BSA over this camp are now making their over-zealous opinions more personal to me. Hence this post.

If you are involved with Scouts Canada in any way, you are likely aware of the program update called the Canadian Path. It is a total program revitalization with the intent of making scouts great again! 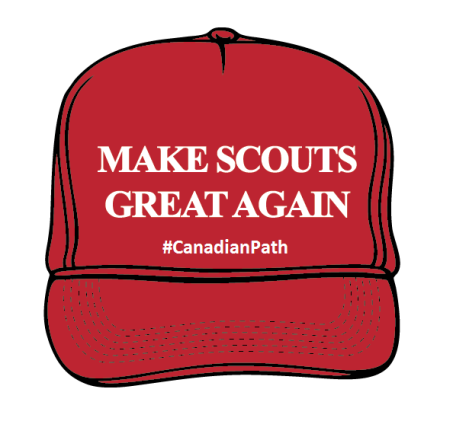 They would be filled with criticisms for you based on four words because Donald Trump used “Make America Great Again” as a slogan for his presidential campaign. Even if you agreed with Trump and actually voted for him, not using his slogan to promote an event now that he won the election would be a missed opportunity. That is my decades of marketing experience and nothing to do with any political views.

Of course, if you aren’t interested in making scouts great again, or if you aren’t a fan of the canadian path revitalization, then I really am off base in my assault of your decisions and my accusations. If you are a liberal looking for opportunities to attack those who don’t agree with everything you agree with, smarten up. You are supposed to be showing youth what they could become and a whiny adult should not be on the list.

My problem is not with liberals or conservatives, republicans or democrats, old or young, tall or short. My problem is that whenever someone brings up anything that separates left and right views, you can always pick who is who too easily.

One person will be shaking their head and grinning, looking for a way to accept someone with differing ideas.

One person will be accusing the other of being intolerant and telling them that they need to change their views or else. Or else.

So if you decide to promote any Scouts Canada camp with the slogan “Make Scouts Great Again”, you will have some adults disapprove. You will even have some that will boycott the event with little or no concern for their youth.

This is exactly why I bring this discussion up. The hypocrisy of liberals and leftists simply makes me want to bang my head against a tree. They will prevent their youth from attending an event because their political prejudice prevents them from being able to accept you having a different political position at a non-political activity. They punish their youth based on a perceived view of your political position without caring what your real views are. They decide NOT TO ACCEPT you or the event you are investing your free time to organize, all in the name of promoting acceptance. Call it irony. Call is hypocrisy. But call it sad that they allow these personal attacks of others affect the youth they promise to help.

This might affect other great marketing ideas that you have… if you host a scout cooking event with the slogan “Feel the Burn”, some will think you did something mildly inappropriate, but you will get plenty of laughs from others.

Why can some people only be accepting of people who think like them? I don’t have an answer for that question.  What I do have is a promise, I will do anything to help with both events and I will bend over backwards to attend them both. And I will do it without condemning Trump or Bernie fans.

When it comes down to it, I will be in attendance for the youth. I wish everyone put them first.