I am so tired of talking about American politics.  It is exhausting, especially when it seems that I need to fight the might of the media circus and the democrats and liberals and social justice warriors all at the same time.  My shoulders are only so wide.

Now people whom I respect are all over this bandwagon and they are using Trump to warn people about provincial politics.

Paula Simons, a journalist with the Edmonton Journal, reported recently that she believes that Trump’s example’s have no place in Alberta politics. Off the top of my head, after spending today with thousands of farmers and cowboys are the Canadian National Rodeo, I would have to say that her views do not represent the majority of Albertans.

Paula insinuated that Clinton may have lost the race for the oval office due to racism but was she acknowledging that the only racists in this campaign were Hillary and her democrat supporters?

(Misogyny) was an essential part of the toxic cocktail that won Trump his triumph.
~Paula Simons (Edmonton Journal)

This woman dares to hint that misogyny had anything to do with this American election without attributing it to the right party.

Trump might be a pig but he is not a misogynist.

This does not represent Trump in any way, shape or form and women who claim it does are simply ignorant or delusional. Men who do so, are mostly just clowns trying to make women think they are feminists. This is becoming quite popular in Canada since Trudeau claimed to be a feminist but I have no idea why. What kind of a man wants to invest energy fighting for something that already exists?

I have challenged several people to show one instance of Trump showing any of the following characteristics toward women:

So while Donald might not be spot on when he said “Nobody has more respect for women than I do”, when he described Hillary as “such a nasty woman” he was not being misogynistic.  It was actually quite an accurate depiction of Hillary. That didn’t stop the feminist social justice warriors from losing their minds and I just shook my head and wondered who would believe these idiots?

Donald did not say women were nasty, he said that woman is nasty.  One of them. You know the nasty one in the white dress that was debating with him?

These feminists tried to make the US election about women and even about Trump’s pro-life stance. Considering how many women voted for Trump, and the fact that barely half the women in America believe in abortions, it was a risky gamble that did not pay off.

How does this affect Alberta?

Paula claims that Trump has somehow infected Alberta politics now. She is referring to two women who withdrew from the Progressive Conservative leadership race the day after Clinton lost.

Sandra Jansen (Calgary North-West MLA) withdrew due to claims of sexual harassment. She insinuated that Jason Kenney’s supporters drove her from the race.

Sandra claimed to be harassed on social media and the internet and the final straw was that insults were written on her nomination forms. I shit you not, that was why she withdrew.

Unless I am missing something, I believe that Sandra Jansen has no business being in politics.  It is not a career choice for the week of heart or the week of spirit and this woman tends to buckle much too easy for the kind of person I need to stand up for my rights as an Albertan. Sandra Jansen is too big of a pussy (yes, I used the “p” word because I couldn’t think of a worthy synonym for it) to be in politics.  Good riddance I say.

Donna Kennedy-Glans withdrew shortly after but didn’t make a hint of gender in her decision. She basically didn’t see a position for her centrist views in the current provincial  political environment.

She is probably correct. Alberta is likely going to go down a dark path of correction to repair the balance that is currently sliding off the left side of the scale thanks to socialistic idealism of Rachel Notley’s NDP party.

Donna’s total lack of gender issue meant nothing to Paula Simons. Why would it? If she could blame the fact that no women were in the provincial race on Trump why not?  The media has convince millions of sheeple that Trump hates women, that he is a world-class misogynist, that he is evil. Blaming him for women not representing in Alberta would be good for readership even if it had nothing to do with the truth or facts.

Welcome to modern biased journalism… the truth is not out there.

She played it well and I probably would have said nothing.  But then people I thought were smarter than me pointed to her article as some kind of highlight of journalism.

If Sandra Jansen had anything worse than name calling, she should send it to the RCMP.  If nobody broke any laws, she should have sucked it up. She is a huge advocate of the pro-choice movement which almost half of women see as murdering babies. She has to have tough skin if she wants to take on that fight and she clearly hasn’t got the chops for it.

It is the feminist movement, being promoted by miopic journalists like Paula Simons, that is driving me nuts because it isn’t fighting for equality any longer, it is fighting for privilege and that is something I will fight tooth and nail to eradicate.

Who would I vote for?

We just had a Poliwing meeting in St. Albert on election night and at it I discussed provincial politics with several people with three main options in my mind… all with the end goal of replacing Rachel Notley with anything smarter than a loaf of bread…

I condemn any disrespectful comments or conduct directed at people in public life. Such conduct is even more egregious when directed at women.
~ Jason Kenney

Really Jason? You condemn disrespectful comments? Suck it up princess. You remind me of a certain politician we already discussed. They are just words and hearing words being directed against your ideals and policies is part or politics.

But you go further and says that “disrespectful comments or conduct directed at people in public life” is somehow worse. Wait a second cowboy… are you saying that something said toward you is worse than if someone says that same thing to me? Who the hell do you think you are?

As a public servant, you certainly do not know your place in the food chain. You work for the electorate, the voters, for me you ass-hat… and you are NOT more important than me. You are a public servant. I am the public. You are supposed to be MY servant! That is the role you want to take on at any rate and apparently you don’t even know your job description.

But you weren’t done yet… then you add that any “disrespectful comments” are even worse if they are aimed at a woman?

What the hell gives you social justice feminists the gall to think that women are worth more than men? I realize that you aren’t interested in equality but please pursue your feminist agenda in your personal life. It has no place in politics and we are getting enough of it from that punk running our country right now.

If there was a chance that I would have voted for a Jason Kenney solution, it has drastically been down-graded until I hear something explain this feminism and apparent misandry.

Do I hate the idea of women in power?

I have no problem with a woman in power if she is the right woman. Granted it is an uphill battle for women because of the track record of some of the dumb-ass twits that have made it high enough up the political ladder to get noticed.

Kathleen Wynne (Ontario Premier – Liberal) has been an utter disaster for that province and should probably be in prison.

Alison Redford (former Alberta Premier- Progressive Conservative) was a disaster and should probably been investigated and fined for some of her lavish experiences.

Hillary Clinton (American Democrat, President wanna-be and former First Lady, Senator and Secretary of State) has been another colossal disaster and should absolutely be facing a trial and probable prison .

Rachel Notley (Alberta Premier – NDP) is a bully and a socialist dictator with zero value for due-process or the freedoms that we Canadians thought all politicians valued. While she probably hasn’t done anything that should have seen her in prison yet, she has made it clear that she knows nothing about economics and hates Alberta and Albertans. And she has three years left to work on a reason to sit in front of a judge. 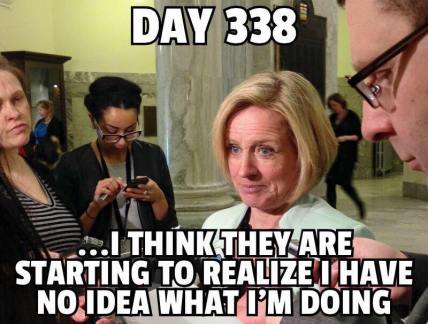 If a party or a campaign cannot conduct itself in a way to ensure the most basic of rules around inclusivity — for instance anti-harassment — then quite frankly that party or that campaign is not equipped to govern the province.
~ Rachel Notley – Alberta Premier (NDP)

I agree with Rachel Notley 100% and you haven’t heard me say that before.

Rachel, I have one question for you…

If the CRA and RCMP both investigate Trinity Christian School Association and find that they did nothing wrong… which would indicate that your NDP party acted without due-process or valid evidence to shut down a school and disrupt the lives over over 3500 students, their teachers, a school board and the countless family members and Albertans…

Will you admit that you and your party have repeatedly engaged in harassment against Albertans and step down as premier?

It is a simple question.

5 responses to “Misogynistic Feminists. An oxymoron or fact of life?”