So I hadn’t planned on writing again before heading to Europe but I went on Facebook and made a couple comments which resulted in some heated private messages about the usefulness of unions.

If you work for Canada Post or any other unionized shop where you get 7 weeks of holiday a year, 17% more earnings than your private sector counterparts, or infinitely accumulating sick days (this means you could take your 15 sick days each year, which is already insane, and accumulate them over a 20 year career to get a year of full pay without showing up for work, something I have never personally heard of anywhere); enjoy what you have but look at it with an open mind. If you tried to get a private sector company to dish out these benefits they would close their doors and you would be unemployed.

Don’t argue, that is simple common sense. If you are anywhere near 50 you can recall a day when a young Fred Smith was buying up airplanes and ripping seats out of them to move stuff instead of people. He was claimed to be more looney than Walt Disney ever was yet he persevered and now, the company he built, Federal Express (now FedEx), is fighting with a dozen other huge companies that also do nothing but move stuff.

With the advent of technology like facsimile machines, email, the internet, free long distance, video conferencing, social media… how on earth do you Canada Post workers think you can compete when you force your employer to pay you what you do and then cripple their income by going on strike?

Many of the union workers understand this but many others are just greedy socialists who don’t care about the government or the rest of society. Your days are numbered. The people are going to speak and your actions today are going to have a lasting effect on the business of delivery in this country. People like Fred Smith are laughing all the way to the bank because of your stupidity and self-imposed destruction. 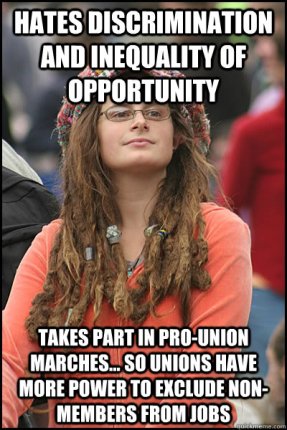 Do we need unions?

There was a time in this country when unions were needed to protect the lives and safety of employees and keep 8 year old kids off assembly lines but the government takes out tax money to make sure all companies comply with the laws now… unions are businesses in the business of taking tax payers’ money to blackmail employers into giving them something that they simply don’t deserve.

That was one of many things I typed into social media this week that instigated hate from union slackers.

While I agree that unions were needed at one point in our history, if governments weren’t so corrupt there would be no use for them today. That is a huge IF though, and governments are more corrupt than the unions and businesses that run them. The fact that it is illegal to get a government construction contract in Quebec without being unionized just goes to show you the level of corruption. There is nobody with any semblance of common sense who can think this isn’t organized crime ownership of the Quebec government. There is simply no benefit to anyone except the union ownership.

Because of corruption at government levels, I do believe that unions are still required but probably not in the sense that you would think. There is a national organization in Canada that I believe exists solely to counter they corruption by allowing non-union companies and employees to join together in brotherhood to get contracts previously restricted to union businesses because of laws implemented to protect their union interests.

Merit Canada, while a union by definition I suppose, also brings larger numbers of contractors and employees together for discounts and purchasing power for benefit packages and so forth. They don’t get together to blackmail governments or employers but out of necessity, to battle corruption in governments and insurance industries. Their business model actually makes more sense than I would have supported a few years ago but education is a wonderful thing.

Let’s talk about ethics and corruption

In a 2004 court decision to remove California tenure laws for teachers (which made it nearly impossible for a school board to fire a teacher after 2 years), an interesting quote was said that has stuck with me…

This is where union’s are at… they don’t care about the people, the country, the businesses or anything other than their union dues.

Last year the California Los Angeles County Federation of Labor fought very hard to get the state of California to raise minimum wages to $15 and they succeeded. How could this be a bad thing right? I mean the union just spent their money (or the money they rip from the cheques of working Americans) to fight for the benefits of all workers in California.

So am I wrong about unions? How could they fight for more money for all workers and still be the corrupt manifestation of what organized crime used to be?

Don’t jump on me so fast. That California union won their case, got minimum wages raised and then turned around and asked Santa Monica City Council to allow unions to bypass the law. They want to be able to pay union employees a lot less so they can use the law to sign up new businesses with the union… if you unionize your employees you can stick with the $10 an hour you are used to paying, otherwise you are going to have to pay the new $15 minimum wage that we got the government to institute!

How in the hell can anyone read this and still stand behind the idea of labor unions? 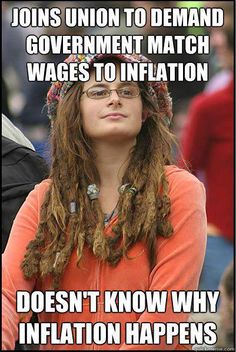 I am not alone

Rebecca Friedrichs has lost her lawsuit to allow teachers in California’s (the largest public union in the USA) to opt out of the union dues. I was so hoping that she would be more successful but the unions still have their hooks in the corrupt judicial system.

But the fact that 10 teachers were willing to take this to the supreme court shows a huge shift in public perception. We are not alone and we will take our country back from this corruption and I only hope that I live long enough to see it happen.

Hopefully the next generation of youth can learn from the obscene failures of the millennials and actually do something.

One response to “Unions: An archaic solution to non-existent issues”