If you aren’t aware, my wife and I have been hosting a New Year’s Eve family party every year for the past couple decades.  It is basically an escape for parents that otherwise wouldn’t get one… or aren’t excited about spending $200 on a babysitter for one night so they can get away from their rug rats.  We have 6 of our own kids still at home so it makes sense to host this event rather than taking over someone else’s home.

Our kids also don’t have regular sleeping schedules so they don’t seem to have much of a problem staying up until 3 or 4 am.  We home school them and my wife is not a morning person, so if the kids want to wake up at 10am that is fine by her.  I don’t suppose she has much of a problem with noon either, but she will smack me if I tell you that.  Damn good thing she doesn’t read my blog posts eh?

So this New Years Eve I made the punch because I don’t drink and need something other than juice or pop to quench my thirst.  Apparently some of the drinkers were using my punch as mix and even the people not getting drunk were enjoying it.  I don’t recall, but I supposedly told someone who I would get the recipe out to them because it is truly a great punch.  I did not get back to them and it is already January 2.  Can you believe my nerve? 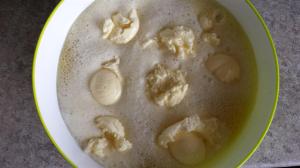 the most awesome punch recipe

So here it is…

The punch bowl is basically filled with Shirley Temple and ice cream.  We swap out the 7-up for ginger ale because the flavor is simply better.  The ice cream has a dual purpose as it makes the drink creamy and frothy and cools off the mixture without diluting the crap out of the punch (goodbye ice).

If anyone else has a great punch recipe let me know or if you try this one out let me know what you thought of it.

By the way, I can’t take all the credit for this one.  In my youth, I was playing music at a wedding and this is what they had.  I fell in love with it and order Shirley Temple’s to this day, which is why I had the grenadine sitting on a shelf at home.  That reminds me, I am out of grenadine.  Don’t let your wife convince you that the pomegranate mio squirt stuff is the same thing.  It is so NOT the same thing.