A wise man (good luck figuring out who) once said, “all that is necessary for the triumph of evil is that good men do nothing”.  Well Alberta… I am a good man… doing something… I am screaming from this little page in a dark corner of the Internet, “Educational change is not wanted!!!  It is NEEDED!!!”

I think that we all expect some degree of exaggeration and hype from the media but when common people jump on board and start spouting their misinformation it is not just wrong but it is irresponsible.”

Yes, that is the mantra of the day if you live in Alberta.  It seems everywhere I look I am seeing someone whining about the new math system that the schools are using.  I am not the minister of education, and even though I do not believe that he is competent to introduce these changes on his own, I have to believe that he had some input from someone on the matter.  I am also not Dr. Nhung Tran-Davies, who seems to have all the proof in the world that this system that was introduced less than four years ago is already destroying our children’s ability to succeed in the world.  I like that you started a petition… i disagree with it with every bone in my body but it is a free country.

And I definitely do not want to be one of the seemingly endless line of people who seem to be bringing facts out of the wood work to justify lynching our politicians (cue C. Dale or the hundreds commenting on his/her facebook post).   I am not sure what the C. stands for but by not posting your name I end up believing that you have little or no confidence that you even believe what you are saying (if you are just jumping on a bandwagon to make yourself feel like part of something I apologize for thinking what I was thinking about you).  You again have the right to your free speech but your spewing of misinformation brings me back to my first line of this blog… and me doing something.

I want to address this facebook post by the mysterious C. Dale for a few minutes.  I have been around long enough to know that anyone can find a statistic to prove almost any argument.  Since this is my blog, I will simply stick to my PLAN B… as Dan Aykroyd said it, “just the facts ma’am”.  The facts are pretty simple from where I am sitting… 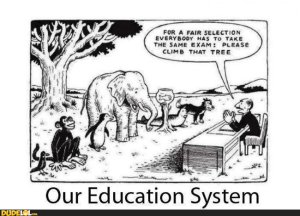 We do need change… and time to see if it is working!

First of all, if we were to give a grade to our education system it would be lucky to get a D.  And no, I am not talking about the one introduced in  2009 that is apparently “failing”.  The fact is that I haven’t met a kid at a drive through that could count back change in a decade.  As an aside, I really enjoy driving up to the window and when they ask for $12.30 I give them a $20… wait till they open the till and then hand then two quarters… more times that not I have to give someone back a loonie after watching them sweat while handing me the wrong change.  If we had the best educational system in the world (or even a great one), there would not be 2.5 million youth being homeschooled this year in Canada and the US.  Let us at least agree on a couple quick things to start…

Fact #2: You don’t proof-read or research anything you type.

“You’re not preparing children for anything if they can’t complete simple functions, or parents have to pay for tutoring or enroll their children in additional education programing like Kumon…”

Did you seriously say this?  Let’s go to the Kumon website for the facts (so hard to not say dumbass after that)… “Kumon opened the first centre outside of Japan in 1974, in New York. The success of Kumon’s math program in America led to the conception of a reading comprehension program, which was developed by a team of expert literature and reading specialists. Kumon’s reading program was launched in 1991”.  And that is a fact C. Dale!

Are you seriously even relating the new math to the success of Kumon?  The fact that Kumon has three sites in Edmonton and has been thriving for decades is proof that the old system wasn’t working.  Trying to use their success as proof that a three-year old system is failing is not just insane but irresponsible.  People are reading your crap on facebook and believing it! 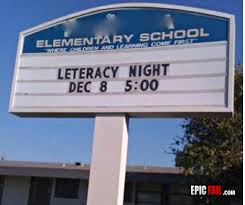 Fact #3: You didn’t even read the letter you are bashing.

“…I’d like to mention that both documents forwarded certainly contained a lot of words – but really said nothing. Once all the ‘feel good’ and ‘fluffy’ words were removed, there was no substance – no clear indication on what your intent and direction for our education system is”.

Once again quoted from facebook about the letter sent out to parents of students this week.  No intent?  No direction?  Did we read the same letter?  Here is what I saw in that letter to indicate intent and direction… “Through inquiry-based learning, we’ll build upon these basic, foundational skills while developing additional skills” (sounds like direction)… “I believe it is crucial that we develop a curriculum that uses the best of both methods” (sounded like more direction)… “creativity and problem solving, the application of critical thinking and an ability to collaborate and communicate” (can I stop yet?)… “The redesign process is being led by parents, employers, teachers, students and school authorities, all of whom will be working together over the next two years to develop a curriculum that successfully weaves new competencies in with core skills like numeracy and literacy” (if that doesn’t show intent and direction you might need to find something with pictures).

Fact #4: You and the Dr. are not the only parents in this province.

“I’d also like to add that a number of your statements were completely contradictory, including …that you’re listening to all Albertan’s (clearly not to those who have expressed concerns).”

I have a question for you C. Dale… What about the people who have been complaining about the state of our education system for the past decades with no visible effort for change… those of us who are forced to choose between our family time and educating our kidlets because the public system didn’t seem to want to change with the rest of the world?  Now that they finally start to listen to us, you want to accuse them of not listening to “all Albertans”?

Fact #5: You seem confused about what side you are arguing.

“The largest frustration as a business owner are supposedly educated people entering the workforce who cannot string together a simple proper sentence or perform basic calculations without the use of a calculator”.

Unless these “educated people” you are referring to are 9 year olds, you must be referring to the youth that public education has been pumping out with the old system.  I agree with you 100%.  This is a huge problem and one of the main reasons we started homeschooling our kids back in the 90’s.  I finally see a light at the end of the tunnel and you want to use it to prove that we should stay in the dark ages?  I am confused now… or again… what side are you on?

If that is honestly how you feel then you should just get your kid a book.  This is exactly what teachers learn, how to guide and lead youth… but they have been struggling with archaic curriculums for decades now.  If you don’t want teachers to guide your children you should get them out of school. 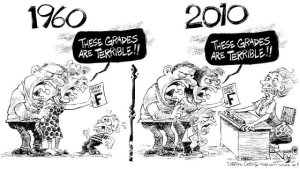 Are we seriously blaming teachers 100% for system failures?

Fact #7: You seem to think that the system of memorizing 12 years of training in school is working… but it is not.

“Inquiry-based learning scientific studies – please forward or provide a link to the completed studies. You say ‘well documented’ and ‘basis of study’. Where are the studies showing it to be proven successful? Again, it’s more about what you’re not saying than the misdirecting fluff that you are saying”

Once again, since you brought up the success of Kumon, let us look at a business built on successfully augmenting the education system you thought was perfect for the past 50 years.  Here is what Kumon says that they do, “Instead of passively receiving instruction from teachers or tutors, Kumon Students actively develop self-learning skills”.  So you have said that Kumon has been needed and they are successful.  They are because they fill an essential gap in public education.  When the government tries something new to fill that gap you condemn them?

Fact #8: You use mis-information to spread your propaganda (and then accuse the government of using “propaganda”)!

Your blatant attempt to “lie” (or spread undocumented fiction if you like that better), “if that legacy includes continuing the trend of decline in student knowledge (per PISA). We HAD one of the best education systems in the world. Not sure what stats you’re looking at, but all the ones I’ve seen clearly show the numbers going down relative to our past levels of accomplishment.”

Fact #9: PISA tests have absolutely NOTHING to do with this new math.

If the new curriculum was 100% rolled out in 2009 (nobody believes that but it is an opinion so let’s stick to facts), if it was completely rolled out, every youth from k-9 would be learning new math in 2009.  PISA only tests youth at age 15, so the only youth that could have been tested  in 2012 (their most recent test) would have been youth who were 11 or 12 when the new math was introduced.  At 11 you would be in at least grade 5.  According to Alberta Education’s K-9 math curriculum for 2007, all grade 5 students have already memorized the times table.

In effect, using the PISA study from 2012 and the declining scores simply proves that we were in a free fall long before anything new came from the curriculum.

Fact #10: If your letter was any longer I would have had to go to a publisher to respond.  The only thing that could have made me more upset about your letter is if it had been signed by Caillou!

So for those of you, like Honorable Jeff Johnson, teachers, parents and anyone already realizing that our education system was failing, and working hard to change it, thank you! You have a long road ahead of you and you may stumble (this may even turn out to be one of the stumbles in the future), at least you are doing something and not fearing change.  I was taught that “you have only failed if you have failed to try”, and you people are trying something.  Forget the fear mongers and the nay-sayers.  They will always be there.  Listen to them but do not let their negativity stop you from trying to do what is needed for our children to succeed in this world.

By the way C. Miles and Dr. Nhung Tran-Davies, I am a geek and father of nine who started home schooling in the 90s out of necessity because the curriculum has never, in my mind, prepared our youth for the real world.  The jury is out as to whether this has changed yet (unless you already made up your mind somehow).