So I am writing this post before our provincial election but I am not going to publish it until the election is over.  My only question from this election, no matter who wins and by how many seats, is do we need to vote again?  I suppose I want to know when we are voting again too and then how on earth we got to this place.

Did someone change a law somewhere that said that the election process no longer has to use common sense?

Someone Dropped the Ball

So today I went to vote.  My wife had a card that came in the mail with her name on it.  I did not.  I figured I might need an extra piece of ID so I brought my passport.  It turns out that I did not need anything more than a license with my address on it.  I was happily impressed by the speed at which I got out.  I did have to sign some piece of paper that said if I voted twice I might end up in prison for a year and get a fine of up to $10,000.

That made sense.  I mean they had my driver’s license and saw that it was me, voting in the only building I was allowed to vote in, so there was very little chance of me voting twice.

It turns out that if my card got mailed to my old address where I was registered for the last election (very likely, almost a guarantee), anyone who checks the mail there could go and vote again in my name.  They will not be asked for ID.  They will not be asked to sign anything.  I am sure they are breaking a law by voting as me but would they actually ever be caught?

At the end of the day, would it not look like I voted twice?  Wouldn’t it look like I signed a legal document when I voted and then violated it?  Of course it would.  I am not nearly as stupid as the people running our province.

And for the record, anyone who voted twice, or using someone else’s card… 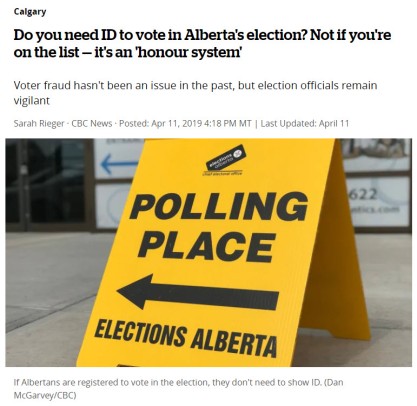 Why Can’t We Vote Online?

I have been wondering why I can’t vote online like I do everything else but now I understand better.  If our goal is to find ways for people to vote without proving who they are for some reason, then online voting will make it a little difficult because everything about online voting is about security.

But why the hell would we ever want someone to be able to vote without showing ID with a photo on it.

Apparently we have never needed ID to vote in Alberta.  If stupid works, why change it?

The legislature debated this when they were looking at revisions to the legislation [in 2017].  They felt the honour system has worked well in Alberta in the past, and it’s not been an issue or a problem, and therefore they were content to remain with what we have currently.

Who is Counting the Votes?

So the NDP thought that they would stand their best chance of winning the election by attacking opposition based on allegations of voting fraud and election irregularities.  I have read so much since this whole thing started that it makes me wish I lived in Florida where they don’t have near this many issues.

Drew Westwater admits that there have been instances of people voting more than once in the past, but mostly by forgetting that they voted in advance polls.  My memory ain’t worth squat, so I totally get it.

The fact is that nobody has been charged for voting fraud in at least a couple decades in Alberta.

We’ve never run into a problem of voter fraud … but if it does occur, we’ll certainly enforce it.

Clearly Drew Westwater is not worried about voter fraud.  They obviously run every voter through a database that tags any names being entered twice at any polling station in the province.  I hope that they do this to every vote instead of grabbing sample sets of data.

There are five voter cards in my house for two adults… and mine wasn’t one of them. Anyone could have taken these four extras in to vote without ID.

The question I have for Drew is this, if you do see a person’s name show up twice, how do you prosecute the person who voted twice when your own law denies you the ability to prove it was the same person because you don’t ask for ID?

Is it not absolutely impossible to convict someone of intentional voter fraud within this system?  Of course it is.

I realize that not everyone out there has someone else’s card, but I guarantee that someone else has mine.  And I have four other people’s at my house.  Two came from previous residents at the house I moved into last year.  I think one is living in Luxembourg right now.  If anyone wants to use his card to go vote again, his name would only show up once because he isn’t voting this year.

This voter card package was dropped off with 5 voter cards… my wife and four complete strangers.

I look forward to seeing if I get all four again for the next election.

And what happens if I die?  How long does my voter card keep getting mailed out to my old address for someone else to use?

With all the talk of election fraud and irregularities this year, why would the government NOT implement showing ID to vote.  Who the hell would object to this?  Nobody.  Anyone who objected to the idea of requiring ID to vote is a complete idiot… and likely an asshole.

The only reason to argue for voting without ID is so you can promote voter fraud.  If The allegations against Jason Kenney turn out to be accurate, he will be charged by the RCMP and the deputy premier will start running the province.  I honestly didn’t let this affect my choice in the election one iota.

Imagine how stupid all the American voters who let the Russian Collusion investigation affect their vote feel now.  Just because there is an accusation against someone, especially when it is something so easily explained, how do you let the spread of potential misinformation when there are so many facts to help you choose who to vote for.

If you believe that a party is corrupt, and that its leader attained his leadership role through voter fraud or manipulation, would you not enact a simple rule, that no Albertan would contest, to avoid the provincial election from going the same way?  Clearly Rachel Notley and the NDP put zero faith in the accusations against Jason Kenney.

And I put zero faith in this election moving forward without any voting fraud.