I have been reading all week about the red cup debate.  I actually enjoyed Donald Trump’s little rant even though I was disagreeing with him.  I do not think it is a big deal.  I hate the way the media jumped on board and said that Donald Trump is boycotting Starbucks.  He never said that, he simply used the hype to get the crowd going and people put words in his mouth.  A company can do whatever they want with their products.  If I don’t like the company or their politics then I wont support them anymore.  It is that simple.

At that point they will either say sorry and try to get my business back because enough like-minded people felt the same way, or they will say “screw Shayne, we don’t even notice him not coming in any longer”.

Everyone keeps telling me that Starbucks no longer celebrates Christmas with their cups.  While I think it is a mistake to bow to the PLHs, that is their right.

I have to say that I think Steven Colbert hit the nail right on the head.

So I am sitting in a Starbucks right now looking around at all the festive colors, I get that they don’t want to piss off some liberal social warriors or Muslims (clearly the only two people complaining) but when I look around their store they are clearly trying to appeal to my sense of seasonal joy as a Christian and a human who likes all the lights and festiveness of this time of year.  I do hate companies who forsake our national traditions in order to appease these two minorities but that is my right as much as it is their right to offend me.

I would have never said a word about Starbucks and their red cups unless I went in a store but now that I have, I feel obligated to mention how much they seem like hypocrites.  I get not wanting to put a nativity scene on your cups because not everyone is a Christian but if your whole store is going to get on the seasonal commercialization, who not go all in and celebrate the season as you always have?

With all the pretty writing and colorful holly on the windows and the whole store seemingly going red and green, it would be nice to see something in the store that actually made me think about Christmas or even winter.  The whole ambiance seems a little confusing. 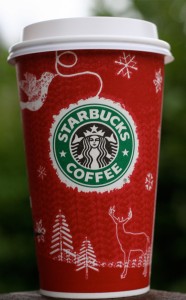 As for the Christian’s complaining that Starbucks doesn’t like Jesus, I agree.  Starbucks is a company.  How the hell would it ever like Jesus?  Their cups used to have pictures of big Christian symbols like snowflakes and snowmen… oh wait… apparently it is becoming more popular for Christians to become psycho liberal housewives too.

These cups are a big deal and there are actually websites that track the worldwide release day for the cups. 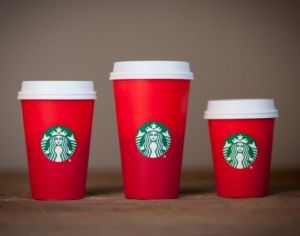 I hate that Starbucks is bowing to the political pressuring from PLHs (Psycho Liberal Housewives) and the Muslim community, and I might not go there as often but would I boycott them over a corporate decision like this?  Doubtful.  They may only lose a couple hundred dollars a year off me but I doubt they will notice.

The only thing that could make this worse is bowing to the pressure of these Christian nutjobs.

For anyone who thinks this was a bad business move for Starbucks, think again.  I can’t even guess how many people are going in to check out their red cups so congrats Starbucks.